Before we will discuss the history of Schnauzer dog breed, we would like to explain what it means “breed dog” exactly. The dogs are considered themselves as pure-breed only if they:

The history of the breed dates back as far as to the appropriate documentation. In case of Schnauzer, it would be the half of XIX century because from that period cynologists started to be interested in this group of dogs. This quite late interest in Schnauzers arose due to the fact that they were country dogs. Therefore, the way from unknown and stable dog to the Schnauzer nowadays was quite long.
The lovers of this breed put a lot of work into strengthening various desired dogs’ features. All the three breeds (the giant, standard, miniature Schnauzer) comes from southern Germany and Switzerland. However, we are not able to state when exactly the name “Schnauzer” was given for these dogs. It is stated that the name was used in 1842 by Jeremias Gotthelf, the historian of country lifestyle. In German, the word “die Schnauze” means “muzzle”. That is why, the name “Schnauzer” is connected with the dominant head – long muzzle.

What is the real Miniature Schnauzer?
The Miniature Schnauzer, despite short height (30–35 cm tall) and weight (6–7 kg), is equal in courage to his larger brothers. This is a small dog with a huge heart that extremely loves his master. While walking, the dogs often preferred the master’s company to the play with other dogs. The Miniature Schnauzer is extremely alert, smart and very brave dog. The most characteristic features of the Miniatures are: great perceptiveness, divisibility of attention and great sense of direction. The dog is amazingly sensitive to his master’s mood and possess large sense of justice. The Miniature Schnauzers are very easy to upbringing. The Schnauzer’s bitches are really good mothers that take cares of their puppies with great attentiveness. 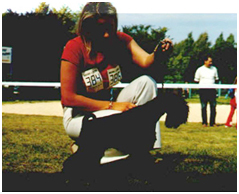 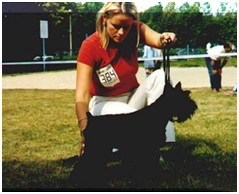 The Miniature Schnauzer is the smaller copy of the Schnauzer without dwarfism defects. 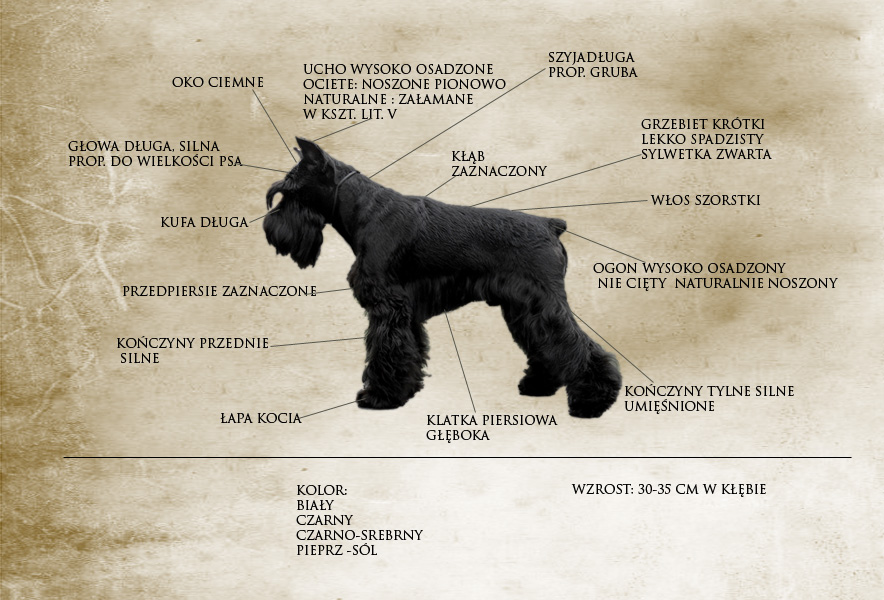 DATE OF PUBLICATION OF THE ORIGINAL VALID STANDARD: 06.03.07.

BRIEF HISTORICAL SUMMARY: Around the turn of the century a dwarf Schnauzer from the Frankfurt/Main area went on his way, then still described as a rough haired Zwergpinscher (Miniature Pinscher). Due to the different shapes, sizes and types and the muddle of harsh, soft and silky coat textures, it was no easy task to evolve a small dog with the appearance and the characteristic qualities of his bigger brother, the Schnauzer.

GENERAL APPEARANCE: Small, strong, stocky rather than slim, rough coated, elegant. A reduced image of the Schnauzer without the drawback of a dwarfed appearance.

BEHAVIOUR/TEMPERAMENT: His nature is similar to that of the Schnauzer and is determined by the temperament and the behaviour of a small dog. Intelligence, fearlessness, endurance and alertness make the Miniature Schnauzer an agreeable house dog as well as a watch and companion dog which can be kept even in a small appartment without problems.

CRANIAL REGION
Skull: Strong, long without markedly protruding occiput. The head should be in keeping with the dog’s force. The forehead is flat, without wrinkles and parallel to the bridge of nose.
Stop: Appears well defined due to the brows

FACIAL REGION
Nose: Well developed nose leather, always black.
Muzzle: Ending in a blunt wedge. Bridge of nose straight.
Lips: Black, smoot and tight-fitting to the jaws. Corners of lips closed.
Jaws/Teeth: Strong upper and lower jaw. The complete scissor bite (42 pure white teeth according to the dentition formula), is strongly developed and firmly closing. The chewing muscles are strongly developed but the cheeks must not interfere with the reactangular shape of the head (with the beard).
Eyes: Medium sized, oval, facing foreward, dark with lively expression. Eyelids close fitting.
Ears: Drop ears, set high, V-shaped with inner edges lying close to the cheeks, evenly carried , turned forward towards temples. Folds parallel, should not be above the top of the skull.

BODY
Topline: Slightly sloping from withers towards rear.
Withers: Forming the highest point in topline.
Back: Strong, short and taut.
Loins: Short, strong and deep. The distance from the last rib to the hip is short to make the dog appear compact.
Croup: Slightly rounded and imperceptibly blending into tail set on.
Chest: Moderately broad, oval in diameter, reaching to the elbows. The forechest is distinctly marked by the point of the sternum.
Underline and belly: Flanks not too tucked up, forming a well curved line with the underside of the ribcage.

TAIL: Natural; a sabre or sickle carriage is sought after.

FOREQUARTERS: Seen from the front, the front legs are strong, straight and not close together. Seen from the side, the forearms are straight.
Shoulders: The shoulder blade lies close against the rib cage and is well muscled on both sides of the shoulder bone, protruding over the points of the thoracic vertebrae. As sloping as possible and well laid back, forming an angle of appr. 50° to the horizontal.
Upper arm: Lying close to the body, strong and well muscled, forming an angle of 95° to 105° to the shoulder blade.
Elbows: Close fitting, turning neither in nor out.
Forearm: Viewed from all sides, completely straight, strongly developed and well muscled.
Carpal joint: Strong, firm, barely standing out against the structure of the forearm.
Pastern: Seen from the front, vertical. Seen from the side slightly sloping towards the ground, strong and slightly springy.
Forefeet: Short and round. Toes well-knit and arched (cat foot) with short dark nails and resistant pads.

HINDQUARTERS: Standing obliquely when seen from the side, standing parallel but not close together when seen from the rear.
Upper thigh: Moderately long, broad and strongly muscled.
Stifle: Turning neither in nor out.
Lower thig: Long, strong and sinewy, running into a strong hock.
Hock: Very well angulated, strong, firm, turning neither in nor out.
Metatarsus: Short, vertical to the ground.
Hind feet: Toes short, arched and well-knit. Nails short and black.

GAIT/MOVEMENT: Flexible, elegant, agile, free and ground covering. The forelegs swinging as far forward as possible, the hind legs, ground covering and springy, provide the necessary drive. The front leg of one side and the hind leg of the other side move forward at the same time. The back, the ligaments and the joints are firm.

HAIR: The coat should be wiry, harsh and dense. It consists of a dense undercoat and a not too short top coat, lying close to the body. The top coat is rough and sufficiently long to allow the checking of its texture; it is neither bristly nor wavy. The hair on the limbs tends to be less harsh. Coat short on forehead and ears. Typical characteristics are the not too soft beard on the muzzle and the bushy eyebrows which slightly shade the eyes.

When breeding Pepper and Salt, the aim is a medium shading with evenly distributed, well pigmented, pepper colouring and grey undercoat. The shades from dark iron grey to silver grey are all permitted. In all colour variations there must be a dark mask, which should adapt harmoniously to the respective colour. Distinct light markings on head, chest and limbs are undesirable.
For the Black/Silver colour, the aim in breeding is a black top coat with black undercoat, white markings over the eyes, on the cheeks, at the beard, at the throat, in two divided triangles at the front of the chest, on the front pasterns, on the feet, on the inside of the hind legs and around the anus. The forehead, the neck and the outer sides of the ears should be black like the top coat.

FAULTS: Any departure from the foregoing points should be considered a fault and the seriousness with which the fault should be regarded should be in exact proportion to its degree and its effect upon the health and welfare of the dog.

Any dog clearly showing physical or behavioural abnormalities shall be disqualified

← back
Top
We use cookies to ensure that we give you the best experience on our website. If you continue to use this site we will assume that you are happy with it. Close